Size is everything: It looks like the micro car is here to stay

Hands up all those who laughed when the Smart car first burst onto the scene.

Its been nearly 14 years since the smallest of the new generation micro cars caused a real hoot on Britains roads. But after the initial sniggering, people have certainly learned to love this miniature motor for its performance, practicality and economy.

However. Micro cars are certainly not a new invention and their rise in popularity could simply be down to factors such as; higher petrol costs, traffic congestion and a huge rise in car ownership.

How do you define a micro car?

OK. Well apart from being small, there are a few other specifications that define one of these rare breeds of motor.

Engine size, number of passengers the car can carry, tyre size, and brake technology are all taken into account and are important; as drivers registering a micro car will often receive discounts on things like tax and insurance.

There are some other common traits which might help a novice to recognise one when they are out on the road; three wheels, lifting bodywork instead of doors, no reverse gear, a length of less than three metres, and an overall size of less than 85 cubic feet, have all been common features down the years.

Greater engine capacity and sporty designs have seen drivers committing more speeding offences in recent years however, something that would have been unthinkable in the early days of miniature vehicles.

Though dating back to the early 1930s, it wasnt until after the Second World War that the mini mobile really became popular.

Most micro cars in Europe were designed and made in Germany, owing to the countrys prominence within the mechanic and auto manufacturing industries. Some of the most prominent car designers were former aircraft engineers, who were looking for a new career following the end of the war.

In the 1960s, the smallest micro car ever was designed in the shape of the Peel P50, firmly putting this new form of automobile on the map.

Since the post war boom and the subsequent popularity of the swinging 60s, the fashion for miniature cars began to spread around the globe.

Japan saw the arrival of kei cars, basically scaled down version of conventional cars. France developed their very own voiturettes and of course bubble cars, city cars, and smart cars have all become popular in the UK.

The modern day version of the micro car is the smart car.

The Smart car brand is an offshoot of Daimler who adopted the Smart brand for its own type of micro car back in 2000.

Many aspects of the smart car are similar to those of the first micro cars that were created in the 1940s and 1950s with regards to size and weight, but manufacturers have been quick to give the Smart car a real identity of its own for the 21st century.

Designed for urban roads, where parking space is often scarce, especially in city centres, this new model was seen as the modern city car for the modern city individual. But developments in design, storage and safety measures have meant that the Smart car is now seen as a genuine option for almost everyone.

The future of the micro car

Micro cars have always been economical, but further development could mean that they become pioneers for cheaper and cleaner vehicles in years to come.

Electric versions have been available almost as long as the cars themselves. But manufacturers are always keen to capitalise on the craving for an environmentally vehicle; as well as one that can avoid the ever rising prices at the pumps.

Like its predecessors in the 1940s, the CityEl is made in Germany and is extremely popular domestically. But manufacturers Citycom GmbH hope this is just beginning of a long and prosperous future for the electric micro car.

Why Push Bikes for Toddlers?

Preparing Your Car or Truck for a Show 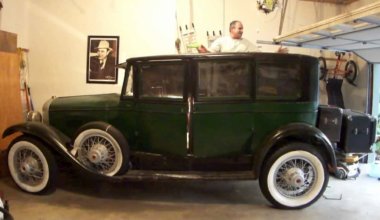 Read More
From bootlegging to bankrobbing, these four are the most infamous cars in American history.