The Porsche 911 with Forged Wheels and Sleeper Status

DP Motorsport has taken a classic Porsche 911 to another level of style and performance with their latest upgrade conversion that sports lightweight modifications, more power, forged wheels, and more!
0
Shares
0
0
0
0

Theres nothing like driving a vintage Porsche 911. Its a true drivers car and its rear-engine, rear-wheel drive layout is an exciting thing of which to take advantage. The Classic G-model Porsche 911s of the 1980s were coming of age and to the end of their lifespan, but that doesnt mean they werent fun and exciting. The German Porsche specialists at DP Motorsport wanted to celebrate their anniversary by building a sleeper version of the sports car by modifying everything except the exterior for a lightwegith performance car. Everything from the paneling, engine components, chassis, and more was upgraded with DP Motorsport using forged wheels, lightweight carbon fiber, and more to extract as much as it could from the sports car.

The German aftermarket tuning company first got to work on overhauling the engine. The factory 3.2-liter flat-six cylinder engine was overhauled with many new parts and components designed to extract maximum performance. The naturally-aspirated engine was outfitted with new ported and polished cylinder heads, and 288 degree Schrick camshafts. The team then installed a 67 mm throttle body and a lightweight flywheel for better engine response. Rounding off the modifications is an RSR titanium racing exhaust with 100-cell catalytic converter that improves the sound of the engine. After the modifications, the engine sends a total of 270 horsepower and 307 Nm of torque to each of the rear forged wheels. Power is transferred through a five-speed 915 gearbox with limited slip differential and exterior oil cooler system.

Many changes were made to the body of the Porsche 911 by DP Motorsport to reduce weight. All of the hinges and brackets were perforated and galvanized to cut weight along with the hardened Perspex windows. The team then gave the entire sports car including the forged wheels a coat of Metallic rock-green paint for a custom look.

With the modifications bringing weight down to just 905 kg overall, the team kept their focus on the chassis. Here, DP Motorsport installed a new set of Porsche 964 brakes and Bilstein adjustable dampers and springs for better handling performance. After the suspension was setup properly, DP Motorsport then installed a set of forged wheels. The wheels measure a wide 7.0 x 16 and 9.0 x 16 and were outfitted with high performance Michelin racing slicks for maximum grip.

Car Fuels - What Clean Options do we have for the Future

Can I Get a Better Deal If I Dont Use My Car Much? 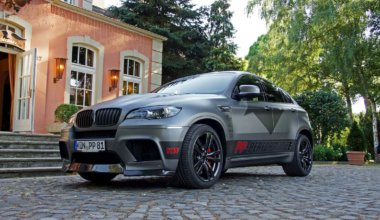 Read More
Tuning company Jotech Motorsports has unveiled a specially modified Nissan GT-R which is designed for the Brazilian consumer.
TTuning & Styling
But you like one type off cars more than others, tuned and modified cars, they make you blood go faster and faster.
TTuning & Styling
A Mercedes-Benz E500 Coupe was tuned by M&D Exclusive Cardesign with 3 piece wheels, engine upgrades, exterior styling, and more!