Road Trip on the West Coast? Here is What You Need to Know

The West Coast of the United States has miles of beautifully coastal scenery, winding forest roads, spectacular sights, and sprawling cities, and the best way to experience it is to take a road trip.
0
Shares
0
0
0
0

The West Coast of the United States has miles of beautifully coastal scenery, winding forest roads, spectacular sights, and sprawling cities. Yes, you can see bits and pieces by flying place to place, but the best way to really experience and absorb the entirety of the West Coast is to take a road trip.

First of all, make sure your car is road trip worthy. Take it to the mechanic to make sure everything is working as it should. Make sure all fluids are full, oil is changed, tire pressure and brakes are good, and that the car runs smoothly. Check all these things a few days before the beginning of your trip so that there is not a last-minute scramble or delay if you find out something needs fixed or replaced.

Make sure you are prepared for any emergency that might arise. Keep a first aid kit and car emergency kit stowed in the car, with extra blankets, flashlights, jumper cables, water, and anything else you may need, depending on the season.

If you are not familiar with the laws of the state you are traveling to (or through), check on them before you start your trip. Some states have different laws on cell phone use in the car, or child seat usage. Speed limits can change at the border as well, even on the same road so pay attention to that. Getting pulled over isnt fun!

Be safe. Make sure you can see out of all windows and mirrors as much as possible, dont rely on caffeine or energy drinks to stay awake, dont text while driving, use seatbelts at all times, and stay hydrated. You will feel better and the chances of wrecking the car and injuring yourself or others go down.

Pick the right route. While Interstate 5 connects Washington, Oregon, and California, it is more for speed than sightseeing. Route 101 however, while running parallel to I-5 for most of the way, runs closer to the coastline and has a more historical and touring appeal.

101 begins in northern Washington at the town of Tumwater. It runs north to Port Angeles, and then turns west until the small community of Beaver, then runs along the Pacific south to the Astoria-Megler Bridge on the Columbia River, which connects Washington and Oregon.

There are many stopping points along the highway to get out of the car, view the coast, and wander the surrounding area, and by the Columbia River there are ferries and bridges to take you to islands or over to Canada for a quick side trip. The highway goes through Discovery and Sequim Bays, Port Angeles, and through Olympic National Park. You drive through Quinault Indian Reservation, around Lake Quinault, and through many small coastal towns.

In Oregon, the highway runs from the Astoria-Megler Bridge, along the coast to where it enters California between Brookings, OR and Crescent City, CA.

In Oregon, you drive through the beautiful area of Astoria, over Youngs Bay and through the Lewis & Clark National Park and many state parks, including Oswald State Park where you can go through Smugglers Cove and Devils Cauldron. In Tillamook, you can tour the dairy (worth it if only for the samples!) before heading down to Seaside and Newport Beach, which are both amazing coastal areas and have incredible tidal pools and tourist shopping. After that, there are even more state parks and beautiful coastline stopping points before dropping into California.

Route 101 in California begins just north of Crescent City, and runs along the coast to just south of San Diego; although for the route closest to the coast, you will want to catch Highway 1 off 101 near Leggett and Fort Bragg. Highway 1 (also known as the Pacific Coast Highway) runs sometimes congruently with 101, but at times when 101 strays inland, Highway 1 sticks to the coast until it joins I-5 in Orange County.

You can take a small detour in northern California to see the famous Redwoods, or stick to the beautiful coastal line and drive through many little towns and fishing villages. There are many stopping points to get out and walk and tour the coast to see unique coastal features. As you go south you start going through bigger towns like Santa Rosa, San Francisco, San Jose, Santa Barbara, Los Angeles, and San Diego.

Be sure to stop off in Santa Rosa at the Charles M. Schulz Museum, then in San Francisco to walk along the Golden Gate Bridge, see Lombard Street and Fishermans Warf, Ghirardelli Square, and take a ferry out to Alcatraz. San Jose has the Winchester Mystery House, a zoo, and multiple great museums for any interest. Santa Barbara has wonderful beaches, shopping, hiking, winery tours, and even a 25-cent waterfront trolley ride.

Los Angeles has a menagerie of things to keep you busy and occupied. You could spend weeks in the museums alone! Take a walk along the Hollywood Walk of Fame (and Hollywood Forever Cemetery) and Rodeo Drive, visit the Santa Monica Pier and Venice Beach, drive down Sunset Boulevard, see the Griffith Observatory, Universal Studios, and of course take a trip to Disneyland in Anaheim or Six Flags Magic Mountain just north of Los Angeles!

San Diego has amazing beaches, parks and museums, Sea World, the Zoo, and the Wildlife Park is fun for any age, and for youngsters (or young at heart) Legoland is the place to be! Then be sure to try some San Diego shopping! My favorite spots are at the Viejas outlets, Gaslamp Quarter, or Seaport Village.

As a last minute tip: check Route 101 and Highway 1s road conditions before and during travel, as landslides or inclement weather may cause you to detour to I-5, before being able to go back to 101.

What Makes Moving Trucks Different From Other Trucks?

CCar Tips & Advice
Cars represent unique tools that improve the quality of our lives and help us move faster in a world where speed and rapidity are two vital things.
CCar Tips & Advice
That old truck has been a major part of your life. It feels like part of the family. Here are some tips for restoring your beloved truck instead of finding a new one.
CCar Tips & Advice
This article offers motorcycle basics, including licensing, safety, practice and more.
CCar Tips & Advice
Heaven forbid you get in a accident. But if you do, make sure that you know what your doing or else you can get in more trouble than just an accident... 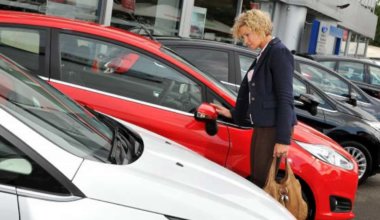 Read More
CCar Tips & Advice
When your car is on the fritz, here are some tips for ways to fix your own car for cheap!
CCar Tips & Advice
The best time to find a mechanic is when you don't need one. Here are a few criteria you should use to choose a mechanic who you can trust, but that also fits within your budget.